President Trump’s false accusations that voter fraud denied him re-election are causing escalating confrontations in swing states across the country, leading to threats of violence against officials in both parties and subverting even the most routine steps in the electoral process.

In Arizona on Wednesday, the Democratic secretary of state, Katie Hobbs, issued a statement lamenting the “consistent and systematic undermining of trust” in the elections and called on Republican officials to stop “perpetuating misinformation.” She described threats against her and her family in the aftermath of Joseph R. Biden Jr.’s victory over Mr. Trump in her state.

In Georgia, where Mr. Biden holds a narrow lead that is expected to stand through a recount concluding Wednesday night, Secretary of State Brad Raffensperger, a Republican, has said he, too, received menacing messages. He also said he felt pressured by Senator Lindsey Graham, a close Trump ally and the chairman of the Senate Judiciary Committee, to search for ways to disqualify votes.

In Pennsylvania, statehouse Republicans on Wednesday advanced a proposal to audit the state’s election results that cited “a litany of inconsistencies” — a move Democrats described as obstructionist and unnecessary given Mr. Trump’s failure to present any evidence in court of widespread fraud or other problems. Republicans in Wisconsin filed new lawsuits on Wednesday in the state’s two biggest counties, seeking a recount. Mr. Biden reclaimed both states after Mr. Trump won them in 2016.

Nowhere was the confusion and chaos more evident than in Michigan on Tuesday night, when two Republican members of the canvassing board in Wayne County, which includes Detroit, initially refused to certify election results, pointing to minor recording discrepancies. It was a stunningly partisan move that would have potentially disenfranchised hundreds of thousands of voters from a predominantly Black city, and after a stream of public backlash, the two board members reversed their votes and agreed to certify. 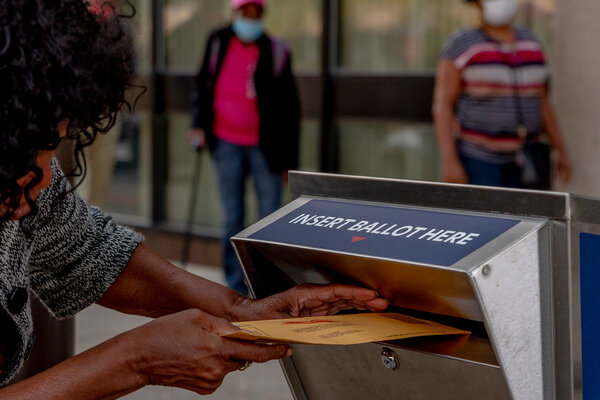 “You could see the racism in the behavior last night,” Mike Duggan, the Democratic mayor of Detroit, said at a news conference on Wednesday, condemning Republican efforts to block the vote. “American democracy cracked last night, but it didn’t break. But we are seeing a real threat to everything we believe in.”

In courtrooms, statehouses and elections board meetings across the country, the president is increasingly seeking to force the voting system to bend to his false vision of the election, while also using the weight of the executive office to deliver his message to lower-level election workers, hoping they buckle.

The effort has been joined by surrogates like Mr. Graham, who has used his visibility as a senior United States senator to make false claims about vote processing in Nevada; forward disputed accusations about mail ballots in Pennsylvania to the Justice Department; and level unsubstantiated accusations about supposedly fraudulent votes for Mr. Biden.

Newt Gingrich, the former House speaker, and Rudolph W. Giuliani, Mr. Trump’s personal lawyer and the former mayor of New York, have made blanket attacks against cities with large Black populations like Atlanta, Detroit and Philadelphia, painting those places in evidence-free tirades as too corrupt to be trusted to hold honest elections.

The extraordinary assault on the voting system by the president and his allies has taken on added intensity as the certification deadlines in several states approach in the next two weeks. The certification of results will further forestall Mr. Trump’s attempt to overturn his unambiguous loss.

Barring some breakthrough in a legal push that continues apace, the president’s strategy appears to center on disrupting the process through which states finalize their vote counts and submit their delegate slates to the Electoral College.

Republicans’ attempts to follow his lead in Wayne County failed in the face of angry Detroit residents who were outraged by what they saw as an open attempt to disenfranchise them. A public comment session with hundreds of voters and civil rights leaders rippled into a three-hour uproar, as they condemned the fact that two white officials were threatening the voting rights of hundreds of thousands of Black voters.

“You look at Black cities and you have extracted a Black city out of the county and said the only one at fault is the city of Detroit, where 80 percent of the people who reside there are African-Americans,” exclaimed the Rev. Wendell Anthony, the president of the Detroit chapter of the N.A.A.C.P., his face almost touching the computer screen. “Shame on you,” he added. “You are a disgrace.”

“But on Jan. 20, 2021, at 12 noon,” he said, “no matter what you do, the president of the United States will be Joseph Biden and the vice president, for the first time ever, will be a Black woman named Kamala Harris.”

“Do you know how many young Black teenagers voted for the first time this year?” said Benita Bradley of Detroit during the Zoom call on Tuesday night. “And you sit here and slap those people in the face. What you are doing to brown and Black people in this community makes you part of the problem, you are the problem. You are the reason why young kids don’t see the promise in voting. But our country will go forward. We will unify.”

The two Democratic members of the Wayne County canvassing board, Jonathan C. Kinloch and Allen Wilson, reacted with similar shock and anger at the initial refusal to certify the votes. After the two Republican members reversed course and voted to certify, the process moves to the Board of State Canvassers, where the results are to be finalized by Nov. 23.

Dana Nessel, the Democratic attorney general of Michigan, said she had kept a wary eye on the Wayne County proceedings, and was particularly worried about any potential litigation stemming from a canvass fight.

“I keep hoping we’ll see a light at the end of the tunnel,” she said. “But it was obvious that these are plans that have been in place for a long time and it’s just a matter of how far the Republicans will take this.”

The events involving the Wayne County canvassing board on Tuesday were a distillation of these waning days of the Trump presidency — a clash over an attempt by Mr. Trump to present once more an alternative version of reality. With only minor irregularities reported, the two Democratic members were prepared to accept that Michigan had conducted a smooth election and to certify the results despite some minor errors, a routine step in the process. The Republican members, William Hartmann and Monica Palmer, had made clear in the days leading to the meeting that they were prepared to accept Mr. Trump’s assertions that Democrats were stealing his presidency.

Ms. Palmer had raised questions on social media about Mr. Biden’s lead in the race in the days after the election, searching for discrepancies in online data from the secretary of state’s office. She also queried Republicans who had applied to be poll challengers at the T.C.F. Center in Detroit, where absentee ballots were counted, seeking examples of the party’s monitors being denied access.

Mr. Hartmann had filled his Facebook page with false allegations and conspiracy theories that the vote was manipulated against the president. They included a post with allegations about malfeasance in Detroit that a judge has called “not credible” and another that featured a video promoting a cornucopia of fraud allegations — including against Detroit — that have unraveled in court or been debunked by election officials. Mr. Hartmann also promoted a video from the right-wing cable network One America News that Facebook flagged as having “false information” about the coronavirus death rate.

Neither Ms. Palmer nor Mr. Hartmann responded to requests for comment, but Mike Shirkey, the Republican leader of the State Senate, said in a statement on Wednesday that there had been “disturbing reports of individuals who allegedly threatened the children of members of the Wayne County Board of Canvassers.”

Ms. Hobbs, the secretary of state of Arizona, said her experience as a social worker had prepared her for “threats of violence and vitriol’’ and called them “abhorrent.” She said they would not prevent her from performing her duties. “Our democracy is tested constantly, it continues to prevail, and it will not falter under my watch,” she said.

She called on the president, Congress and elected leaders to cease spreading misinformation that undermines the system.

“It is well past time that they stop,” she said. “Their words and actions have consequences.”