Post-pandemic China was supposed to be good for Fang Guobao. As lockdowns loosened and online shopping soared, the package courier in the eastern city of Nanjing was delivering about 250 parcels a day, up from 200 before the pandemic.

Then his paychecks stopped. His boss asked for more time twice. Then she stopped answering her phone.

So Mr. Fang and several colleagues resolved to stop working. Even though the outbreak had made jobs scarcer and willing workers more plentiful, they joined a string of other strikes and protests by couriers that is resonating through China and drawing greater attention to their low wages and grueling working conditions.

“You’re supposed to pay us. That’s only right and proper,” Mr. Fang, 50, said. “If there were no personal profit, who would want to be a part of this kind of thing?”

The unrest accelerated in the weeks before Singles’ Day, the online shopping event created by the e-commerce giant Alibaba, on Wednesday. The value of merchandise sold on Singles’ Day, which is like Black Friday and Cyber Monday rolled into one, is likely to shatter last year’s record $38.3 billion as China continues to rebound economically after bringing its coronavirus cases under control.

But the worker complaints leading up to it also suggest that, even as China has posted promising macroeconomic numbers, low-income workers in particular have continued to struggle. Express delivery orders of the kind Mr. Fang ferries have surged, buoyed by increased spending among the middle and upper classes. Yet that boom has not trickled down to the couriers, known as kuaidi, the mostly male and unskilled workers who zip around on electric bikes feeding the country’s online shopping obsession. 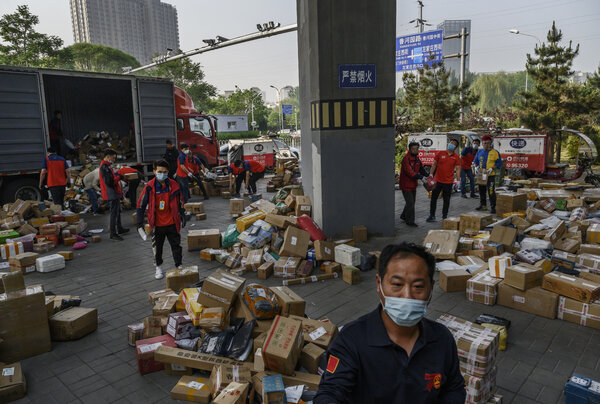 As a result, couriers are going missing and packages have gone astray. Workers in Hunan Province went on strike last month for more than $45,000 in back wages, leaving orders of hairy crab to rot in their boxes. In Shenyang, a city in the northeast, abandoned packages were dumped in an empty field last week. Internet users have joked that their packages are going on vacation, posting screenshots of tracking details that show their orders meandering across the country as they are redirected to functioning courier stations.

The hashtag “What do you think of the courier strikes?” has been viewed more than 1.5 billion times on Weibo, a Twitter-like platform, and was a trending topic on Wednesday.

Dissatisfaction is common in the courier industry, as are sporadic protests. But the courier strikes now, when the pandemic has left many other low-income workers unemployed, underscore both their dissatisfaction and their desperation.

The pandemic may have lent the strikes more public support, said Aidan Chau, a researcher at China Labor Bulletin, a Hong Kong-based labor rights organization. Many commenters on Weibo said they were willing to wait longer for their packages.

“After the coronavirus, everyone knows that workers are having a hard time now,” Mr. Chau said, adding that some people who had been in the formal economy had themselves been forced to pick up gig work.

Many of the workers, who are mostly men from rural areas seeking better jobs in the cities, are not employed directly by the country’s major shipping companies. Instead, they work for local franchises that help those companies complete the last mile of delivery. That model leaves many of the couriers — who numbered more than three million at the end of 2019, according to official statistics — without formal contracts and with few protections when disputes arise.

In addition, the major logistics companies have been locked since last year in a spiraling price war. The companies have tried to pass costs onto the franchises, who in turn have slashed the amount of money that couriers collect for each delivery, said Lin Chengyi, a professor at Insead, an international business school based in France, who has studied China’s gig economy.

Then came the virus. As cities locked down, many couriers were unable to work, and franchises struggled to stay afloat. Some folded. Those that did reopen struggled to pay couriers even reduced wages.

That was what happened to Mr. Fang in Nanjing. His local outlet of Best Express, one of the major delivery companies, did not issue $30,000 in wages to eight workers as promised. Mr. Fang said he was owed about $3,000, the equivalent of four or five months’ pay.

In July, the outlet owner promised to pay by August. August came and went.

So the eight couriers, just under half of the station’s employees, went on strike.

Not long after, their boss vanished. Mr. Fang tried complaining to a higher-up in the company, according to messages Mr. Fang shared with The New York Times. The company official responded that the dispute was not his responsibility.

After striking for a month, Mr. Fang decided to quit. He knew that it would be difficult to find a new job, but it was still better than being a courier.

“There’s no money, there’s no labor contract, and defending your rights is too difficult,” he said.

A spokeswoman for Best Express said the dispute over Mr. Fang’s wages had been “minor” and “swiftly resolved.” She denied that the company was experiencing strikes.

Others told nearly identical stories to Mr. Fang. A courier in Shanghai told the local news media last month that he had been hired just a week before to help deliver a half-month’s backlog of packages, after the franchise’s owner disappeared and the regular couriers quit. After another owner disappeared in the eastern city of Suzhou, couriers filed a police report to recover more than $15,000 in unpaid wages, so far to no avail.

Mr. Chau of China Labor Bulletin said that while workers may have endured a month or two of unpaid wages at first, given the pressures of the post-pandemic economy, that posture had probably become untenable as delays dragged on.

They have few other avenues for seeking help. The government has gradually moved to support workers in the exploding e-commerce industry, officially recognizing “online delivery person” as a new occupation in March. During last year’s National Day parade, delivery drivers led the way.

But legal protections remain scarce, given the couriers’ lack of employment contracts and the difficulty in enforcement across such a scattered network, said Tu Yongqian, a professor of labor law at Renmin University in Beijing.

The dispersed and high-turnover nature of the industry also means that there is little communication between couriers at different branches. Nor are independent labor unions allowed in China. So the strikes that have unfolded in recent months have occurred in isolation, as problems arise at each franchise.

“This group of workers is very big, but they’ve never had the strength to form into an organization,” Professor Tu said.

The lack of coordination has probably helped companies to deny that anything is amiss. Xinhua, the state-run news agency, published an article last month calling reports of strikes “fake,” with unnamed officials at each company declaring that operations were running normally.

Still, as demand peaked ahead of Singles’ Day, even the state news media acknowledged some bumps. China Central Television, the state broadcaster, aired a report on Tuesday about worker shortages at courier companies, though it did not mention strikes.

Even couriers who are not striking feel the ripple effects of others’ protests.

Chen Zhongqiao, a courier in Wuhan, dropped off a package at a checkpoint in September that has still not reached its customer. Workers further down the line had not acted on it for weeks, according to his tracking information.

Mr. Chen said he did not know whether he would be paid for completing his part of the order, but his hopes were not high. He had come to his current employer after the last one had disappeared.

“We’ll have to see whether this branch can hang on,” he said. “If this one also collapses and the boss leaves, then judging by previous experience I again won’t get any money.”