Want to get The Morning by email? Here’s the sign-up.

Good morning. Trump still won’t concede, which Biden called an “embarrassment.” And a look at the implications of Georgia’s Senate runoff elections. 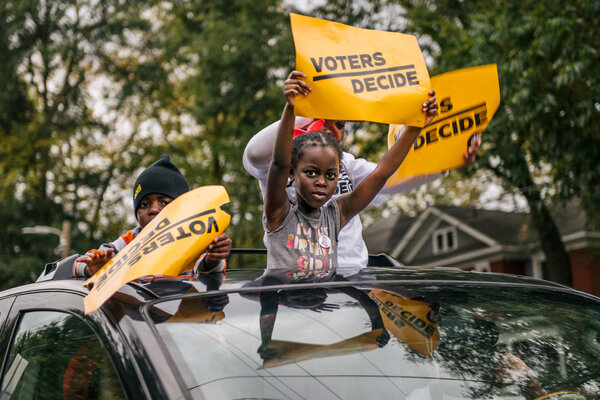 This year’s election season has sometimes felt like the longest the country has ever experienced. It was nasty. It took place during a pandemic that has kept many of us at home. And it still isn’t over.

That’s not even a reference to President Trump’s continued refusal to concede — which, while damaging to the credibility of American democracy, is extremely unlikely to change the result.

When I say the campaign isn’t over, I’m referring to Georgia. Because of both circumstance and a quirk in that state’s law, Georgia will host two Senate runoff elections on Jan. 5 (barring an unlikely change in the current vote totals). The implications are enormous.

If Democrats win both, they will narrowly control the Senate, and Joe Biden will be able to pursue ambitious legislation on the coronavirus, climate change, job creation, taxes and more. If Republicans win either Georgia seat, they will retain Senate control (barring an unlikely change in another state’s vote totals), and Biden will need one or more Republican votes to pass any bill.

In an earlier era, the difference between these two scenarios might not have been huge. Either way, Senate moderates, of one party or the other, would have been the key to passing bills. But our polarized era is different, especially for congressional Republicans.

They were almost uniformly unwilling to work with Presidents Bill Clinton or Barack Obama on major legislation, dealing with taxes, the climate, health care, economic stimulus and more. Obama offered various compromises — like market-based systems to expand health insurance or combat climate change — and still could not win Republican votes. The situation has been more nuanced with congressional Democrats during Republican presidencies, as bipartisan coalitions have passed big bills on stimulus, Medicare and education since 2000.

Maybe Biden will somehow prove more adept at finding Republican votes than Obama or Clinton. More likely, though, the elections in Georgia will shape Washington for at least the next two years.

The most significant difference is probably on climate change. It “is the issue that throws the Georgia runoffs into sharpest relief,” as Vox’s Ezra Klein has written. “If Democrats win 50 seats in the Senate, large-scale climate legislation is possible, even likely. If they don’t, it’s simply not going to happen.”

Here are the basics on Georgia, if you want to go deeper:

One of the two runoffs will resolve a special election following the early retirement of Johnny Isakson, a Republican who is in poor health. The top two vote getters in the first round of that special election will now face each other. They are Senator Kelly Loeffler, a Republican businesswoman whom Georgia’s governor appointed to the seat, and Raphael Warnock, the head pastor at the Atlanta church that Martin Luther King Jr. once ran.

The second runoff is between Senator David Perdue, a Republican running on the normal schedule for a second term, and Jon Ossoff, the Democratic nominee and a documentary filmmaker. Perdue leads Ossoff, 49.7 percent to 47.9 percent, in the latest vote count. But Georgia, unlike most states, requires a runoff if neither candidate wins 50 percent in a Senate general election.

To learn more about the runoff candidates, try these profiles: The Times’s Richard Fausset on Loeffler; The Atlantic’s Emma Green on Warnock; and The Atlanta Journal-Constitution’s Tamar Hallerman on Ossoff and Perdue.

More on the Election

The Times contacted top election officials in every state to ask about illegal voting. Officials in 45 states responded directly. For four of the remaining states, The Times spoke to other statewide officials or found public comments from secretaries of state. None said they had found evidence of any substantial fraud.

Asked whether the State Department was preparing for the transition, Secretary of State Mike Pompeo said, “There will be a smooth transition to a second Trump administration.” Related: The Times’s Peter Baker and Lara Jakes look at the ways Trump is harnessing the government to try to stay in office.

Biden called Trump’s refusal to concede “an embarrassment” but added, “The fact that they’re not willing to acknowledge we’ve won is not of much consequence.”

A Pennsylvania postal worker who claimed to have witnessed election fraud admitted to investigators that he fabricated the allegations. Republicans had amplified the claims to suggest there was widespread voter fraud in the state.

More Americans are now in the hospital with Covid-19 than at any point during the pandemic.

Gripped by a third wave of the virus, El Paso has more people hospitalized with the coronavirus than some entire states. The city is also more than doubling its supply of mobile morgues, to 10 from four.

Dr. Anthony Fauci, the country’s top infectious disease expert, says he estimates most Americans will be able to receive a vaccine by the end of April.

Restaurants, gyms and other crowded indoor venues accounted for 80 percent of new infections in the U.S. from March to May.

The Times’s David Gelles has the story of the husband-and-wife team who founded BioNTech, a German company that has teamed up with Pfizer on creating a vaccine.

At least five Supreme Court justices, including two appointed by Republicans, expressed skepticism of Republican arguments in a case seeking to overturn the entirety of the Affordable Care Act.

The justices’ remarks suggested that Obamacare “appeared likely to survive its latest encounter with the court,” The Times’s Adam Liptak explains. The court has declined to overturn the law in two previous cases.

Biden vowed to expand the law by adding an option for Americans to enroll in government-run insurance.“It’s a human issue that affects every single American family,” he said.

China effectively silenced Hong Kong’s legislature after pro-democracy lawmakers were ousted, prompting their allies to resign. The legislature has been one of the main scenes for opposition to the government.

Pope John Paul II ignored warnings that a prominent American archbishop, Theodore McCarrick, had sexually abused young men, according to a Vatican report. (In Opinion, Elizabeth Bruenig writes that the report implicates “the highest echelons of the church.”)

A 44-year-old judge was fatally shot in her office at Manila’s city hall. The police named a court clerk as a suspect.

More than a third of young people in foster care in New York City identify as L.G.B.T.Q. and struggle to find the support they need, a survey by the city’s child welfare agency found.

Under the Sea: The clicks of bickering dolphins; the burbling of a hydrothermal vent. Scientists have long listened to the sounds of the oceans, but only recently have they turned to the deepest parts of the sea.

Lives Lived: Tom Heinsohn’s blood ran green. The Hall of Fame forward played on eight N.B.A. championship teams with the Boston Celtics, coached them to two titles and became their passionate broadcaster for more than three decades. He died at 86.

Subscribers make our reporting possible, so we can help you make sense of the moment. If you’re not a subscriber, please consider becoming one today.

If you don’t play video games, it’s easy to lose sight of how large the industry is. It earned $120 billion in revenue last year — almost three times as much as Hollywood. Two-thirds of adults in the U.S. play video games, either on their phones, a computer or a console. Gaming is so popular that millions of people visit streaming sites every month to watch other people play games.

Yet video games do not attract nearly as much media attention as movies, television, music or sports. We’re going to do our part to address that deficit by telling you — if you don’t already know — that this week is a big one for the industry, because two new video game consoles are coming out: Sony’s PlayStation 5 and Microsoft’s Xbox Series X.

New consoles are rare. Sony and Microsoft both released the most recent versions of their systems seven years ago. The new consoles will probably stick around for that long, too, meaning these will be the machines that power video games for most of this decade.

The key difference with the new consoles is the quality of the image, with even more realistic graphics. The new systems also promise faster loading times.

“Years of technological advancements and game development are coming to fruition,” Kellen Browning, who covers video games for The Times, told us. “Imagine if a new iPhone only came out once every seven years — that’s what this moment is like for gamers.”

The reviews: Times reporters evaluate the PlayStation 5 and the Xbox Series X.

These pork meatballs, loaded with ginger and garlic, are delicious wrapped in lettuce or served over steamed rice.

What to listen to

Here are five minutes that will make you fall in love with soaring soprano voices.

The late-night hosts poked fun at Trump’s refusal to concede the election.

The pangram from yesterday’s Spelling Bee was godchild. Today’s puzzle is above — or you can play online if you have a Games subscription.

Thanks for spending part of your morning with The Times. See you tomorrow. — David

Today’s episode of “The Daily” is about the battle for the Senate. On the latest “Popcast,” a conversation about how Ariana Grande expands the range of what a pop star can be.

Claire Moses, Ian Prasad Philbrick and Sanam Yar contributed to The Morning. You can reach the team at [email protected].

Sign up here to get this newsletter in your inbox.